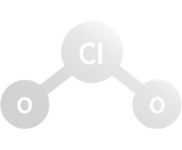 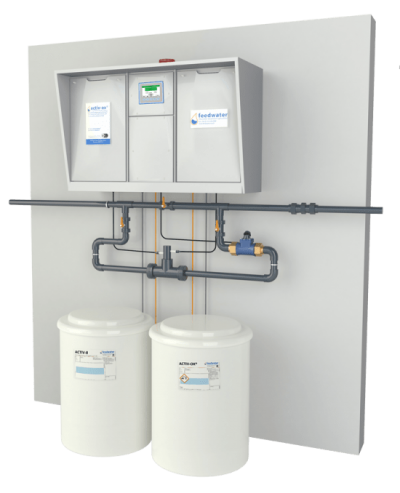 Activ-Ox® is Feedwater’s patented Chlorine Dioxide generation process. It is simpler, safer and more effective than other ways of producing chlorine dioxide and is equally suitable for building services, food & beverage and industrial applications. It can be used to treat anywhere from a few litres of water to thousands of cubic metres per day and has also been incorporated into a unique foam cleaning and disinfection process.

Chlorine dioxide is a powerful biocide and disinfectant for the effective control of a wide range of harmful bacteria and other problematic pathogens such as Legionella pneumophila, the bacteria which cause Legionnaires’ Disease.

The Journal of Applied Microbiology reports that: “Chlorine dioxide…was identified as the most efficient [continuous treatment] for controlling L. pneumophila in a domestic water system.

Read on and learn more about Activ-Ox and why it is the best means of Chlorine Dioxide treatment for any water system.

The chlorine dioxide yield of the Activ-Ox process is very high, converting around 95% of the pre-cursor chemical to ClO2. This is higher than most other processes and much higher than some SCD systems, which not only give a low yield but take a long time to do it.

Another critical difference between Activ-Ox and other chlorine dioxide systems is that it doesn’t need a strong acid. Activ-8, the matching pre-cursor to Activ-Ox, is a special blend of food- and drinking-water-approved weak acids, which is classified as non-hazardous. The patented Activ-Ox chemistry is so different from the way a conventional chlorine dioxide generator works, you could even activate it with Coca Cola!

Water supplies and water distribution systems will have a chlorine dioxide demand, particularly if they already have an established biofilm on pipework surfaces. Each Activ-Ox chlorine dioxide dosing system is supplied with a simple test kit to enable the residual chlorine dioxide to be tested at strategic locations. The dosage level is adjusted accordingly, to establish and maintain the required free chlorine dioxide residual throughout the treated system.

*Use biocides safely. Always read the label and product information before use.*

Go to Top
We use analytical cookies to understand how visitors interact with our website helping us to improve customer experience. By clicking “Accept”, you consent to the use of these cookies.
Cookie settingsACCEPT
Manage consent