Client anonymised for privacy reasons – reference may be available on request

The client had reported continuous and repeated high bacterial levels in the Air Recirculation Process units that feed humid air into the paint spray booths to suppress dirt and dust in the air. This led to poor control, poor compliance and increased costs on disruptive and time consuming cleans.

This was a pre-existing problem left over from the previous water treatment company. It was the result of poor water chemistry control through aging equipment and poor service coupled with a lack of engineer driven management.

Any solution would need to show visual and empirical evidence that improvements to bacterial control had been made.

Feedwater were engaged to assist in this challenge after winning a competitive tender to take over water treatment services for the site. Their Feedwater consultant had built up a relationship with the customer over a number of years and had suggested a move to liquid bromine before the site eventually moved to Feedwater. This relationship was built over time and consisted of showing and demonstrating what the current problems were with the dosing regimen and their aging equipment and slowly planting the seed that equipment replacement was necessary and that a change in chemical dosing could offer improvements.

This was a challenge that required the Feedwater team to think outside of the box and extensive discussions and suggestions were conducted with both Feedwater Senior Management and the chemical Technical Manager to ensure the product selection was appropriate.

It was important to keep the client involved in product selection so several meetings where held to discuss potential dosing plans/methods and setup before progressing to a trial period – this was a small unit based over in a small paint plant where we could complete some trial and error over a prolonged period of time (3 months) before demonstrating our results.

After much trial and error, the solution that was provided was a continuous dosing system of 2 separate chemicals through metering pumps controlled by a timed controller for additional flexibility but power from the recirculation pumps so systems would only dose while running.

This gave ultimate flexibility over a known addition rate into the system. Much superior to the shot dosing of the solenoid operated brominators previously installed.

The final products settled on for the trial were FEEDBROM and FEEDCHLOR SF. These choices were made as even at lower levels than the previous chemical dosing site were seeing very significant results as demonstrated later.

FEEDCHLOR SF was a site-specific chemical Feedwater would manufacture for the client which was Silicon Free to prevent an unwanted reaction with the chassis paintwork. This demonstrated the importance of performing limited trails to work out the kinks and the benefit of manufacturing in-house that it gives ultimate flexibility to developed bespoke products to suit the customers’ needs.

From original discussions to presenting findings took approx. 9 months and were asked to expand the trial to additional paint shops before a wider roll out across the entire site (32 units).

Clear improvements were seen and demonstrated in the bacterial control which would lead to a range of benefits.

Charts to demonstrate performance improvement on Bumper Base coat 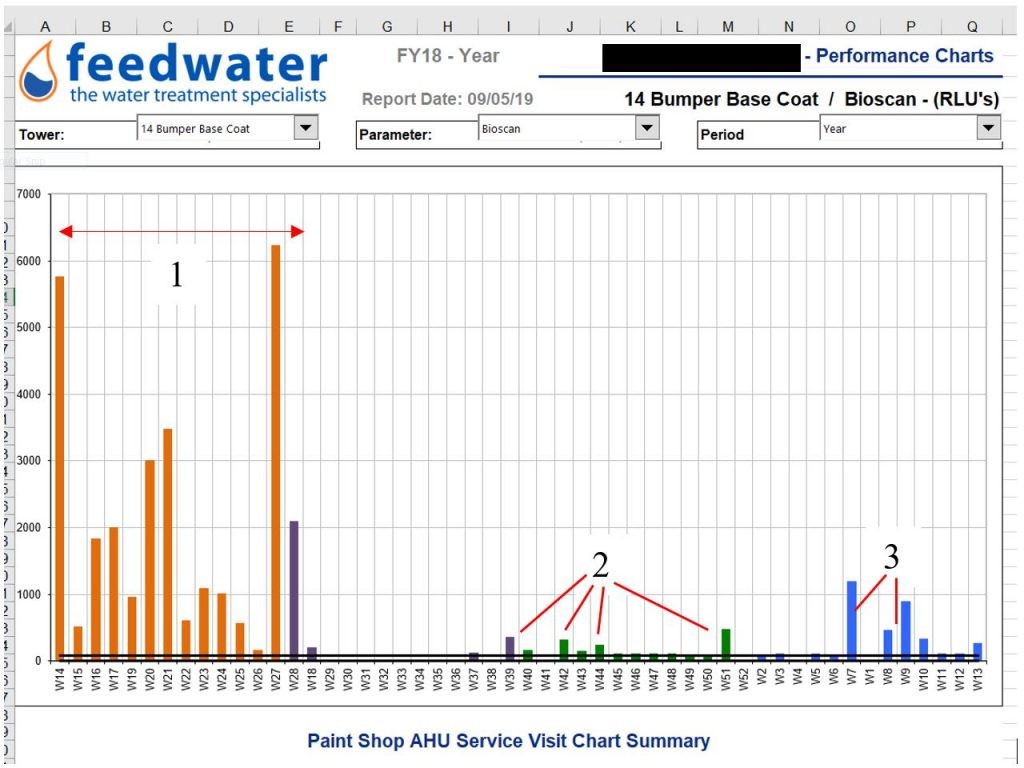 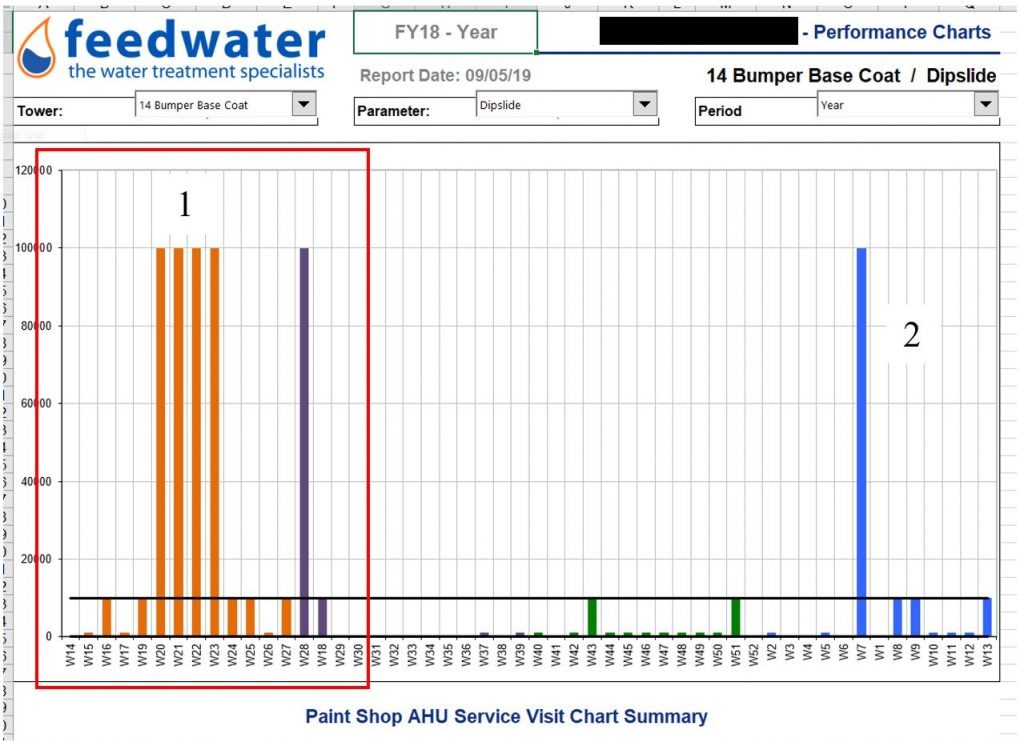 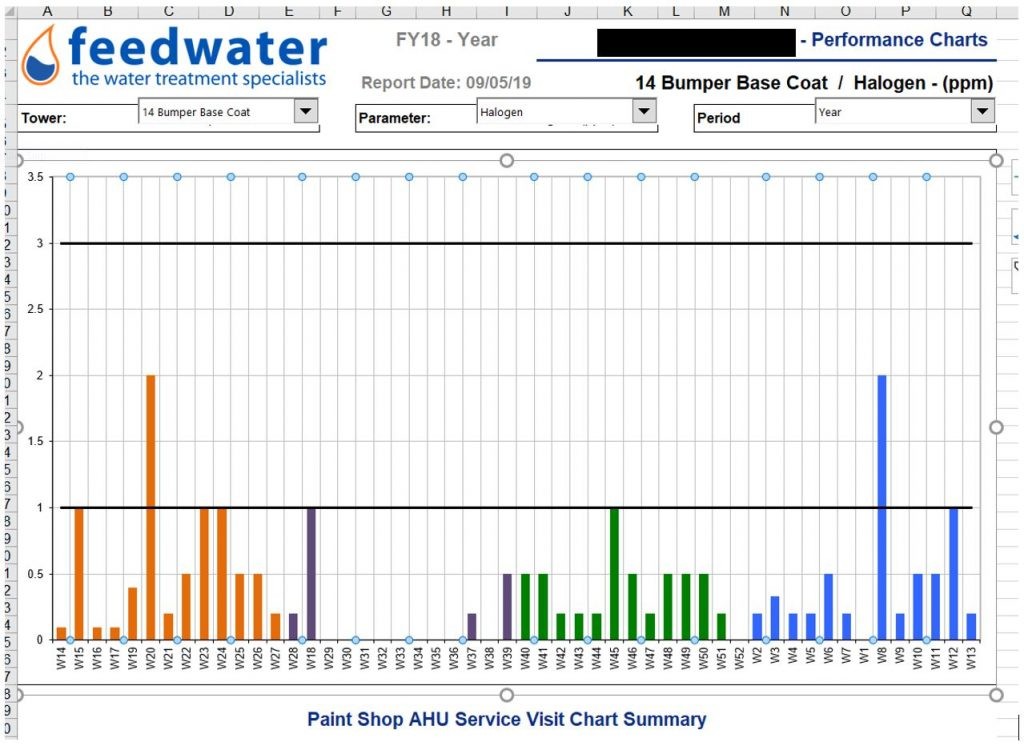 The above graph demonstrates a reduction in both Bioscan and high Dipslides was completed with a consistently low level of bromine much like pre liquid trial levels but with a much more effective kill rate.

It was approximated that once all systems are installed across site that the client will be getting around 25% saving on chemical costs whilst having much better control.

At time of writing the solution having passed trials had been rolled out to an additional two air handling units (with more planned) due to the success in greatly improving bacterial control as shown by the Bioscan (ATP) testing and the dipslide results. There was clearly demonstrated major improvements in performance from when the trial began.

As listed above site have started to experience significant immediate and long-term benefits from switching to a bespoke Feedwater treatment regime.

As measure of success Feedwater aim to provide a solution for the client which; saves time, saves money and reduces the risk of prosecution. In this case we believe it has been demonstrated that the chosen solution has achieved all three and will continue to do so as it is rolled out across site.

To find out more on the use of Feedbrom and Feedchlor in your applications or to speak to us about other Feedwater treatment chemicals call 0151 606 0808 or fill out the contact form below.

Meat Packing Abattoir Cooling Tower Water Treatment Case Study
01/03/2021
Search
Categories
Recent Posts
Go to Top
We use analytical cookies to understand how visitors interact with our website helping us to improve customer experience. By clicking “Accept”, you consent to the use of these cookies.
Cookie settingsACCEPT
Manage consent